Plants and colors filled the scene as Milwaukee native, Adjua, highlighted some of her favorite pieces in her dorm room. Although only a freshman, this First Waver has big ambitions for her artwork in the near future.

What is the form of art that you practice?A: So, my favorite medium is probably painting, um, I’m probably the best at drawing though, and I wanna start to practice fashion.

How long have you been painting, drawing, or doing art in general?

A: I’ve been doing art since I was really young, I can remember doing art when I was three years old, like, as long as I’ve known how to hold a pencil or a paintbrush. Sewing– I’ve been sewing since my freshman year of high school because I took a course at a college, then I started sewing with my grandmothers a lot, yeah, and then we ended up making my prom dress which is pretty cool, my junior year.

What would you say influences you and where does your inspiration draw from?

A: I would say that my dad really influences me because he’s actually a muralist and he’s, like why I do art in the first place. He was there all my life, so art kinda just came naturally to me, like when I was little I would go to his art shows and I remember running around the art galleries with my brother, playing under tables, but yeah, I would definitely say that. Also, most of my art is about women in nature, so just people that I see day to day kinda inspire me. I’m like oh wow, Damitu’s so beautiful, like I just want to paint something like that, and I’ve been working on a garden since my freshman year of highschool and I’m vegan so I’m really connected to plants and nature and things like that. I would also say I’m inspired by the African diaspora.

How have you been expressing your art on campus?

A: Well, in the summer I was here for SCE, and during the summer we had to have a little show for the 11th cohort, and Joi and I, we were a part of the show for our visual art so we painted on shirts and we made protest signs for all the poets to hold while they’re on stage, so that was really cool.

What are some notable pieces or some favorite pieces?

A: My favorite piece is this oval shaped piece of wood that I painted on, it’s a young girl from a tribe in Ethiopia and it’s called Moon Kissed, it’s a really dark skin girl, a painting out of acrylic. And in terms of fashion, I would definitely say my prom dress. Oh, and my favorite drawing would be this piece of a– see most of pieces are of girls– but, this young girl and she’s, like wearing this orange collared shirt and she’s just, like looking off into the distance and it’s out of chalk pastel, and when you look at her eyes, people say that they like to wonder what she’s looking at because it’s like she witnessed something and is like daydreaming or something, but yeah that’s really one of my favorite.

What does the process look like, typically, to create?

A: Well, I see things out in the world and then I kinda, like take a picture of it with my brain, and then I kind of remember and then when I get a piece of paper or whatever I kinda just start, I usually don’t sketch, like, I just go straight for it.

What is the hardest part of the process when you’re making any piece of art?

A: It never starts out how I want it to look, so that gets really frustrating, but you just gotta put time into it and it starts lookin decent you know? And, it looks really good until, like, you’re not finished yet and you set it in your room and you stare at it for hours and then it looks terrible, so then you just gotta start over again, basically.

What is the best part of the process?

A: Just seeing where it goes, ‘cause like I said it never turns out how I want it to turn out, and it usually becomes something cooler or something you won’t imagine. In my work, I like to use a lot of colors, so just looking at all the great colors is really a part that I like.

How do you deal with or respond to feedback whether it’s negative or positive?

A: Um, I always take it into consideration because, you know, it’s just constructive criticism. I went to a performing arts high school, so visual arts was my major and we practiced, like, giving critiques a lot, and at first I really hated it, but it is what it is and also my dad being an artist, like, I’ll think my stuff is like really dope or whatever and I’ll look at it like wow, I’m cold but then I’d show my dad and ask what do you think about this he’s like this, this, this, and that needs to be fixed and at first I’d be salty but it always turns out better once you actually listen to the criticism.

Where do you see your art in the upcoming years?

A: Well, I really want to get myself in a lot of galleries here in Madison, back in Milwaukee, and Wisconsin overall. As of now, I’m trying to work on my fashion a lot and I’m making a clothing line– I want to see my art on the bodies of everyone, basically.

Do you ever do collab work with others?

A: I usually work independently, but I’ve done a couple of collabs, and I’d like to get into more of that, especially with people from different art forms, that’s why I’m really excited to be in First Wave because everybody has something different that they’re practicing and I would get to collab with them. Collabs I’ve done in the past was in the summer with Joi, we busted out a lot of pieces within a day and that was really dope, and then last year I worked on this project called the Stygian Project, and it was basically a collab with a lot of dancers and I did body painting for them. 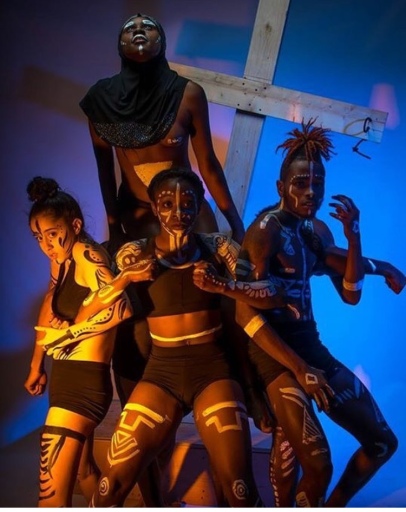 Do you have any last comments or shout outs you’d like to make?